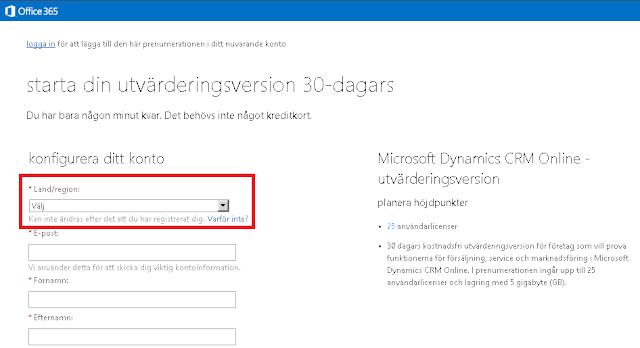 My last posting was regarding some important aspects of the email address that is entered when setting up a new CRM Online organization, you can read it here. In this posting I will be discussing some of the issues regarding the country field.

When registering for a new CRM Online Organization, you are shown a form and the top most field is a drop down allowing you to select which country you want. This might seem innocent enough, but do note the small text saying that this cannot be changed later and let me describe what you are actually setting in you future CRM and you might think a bit harder about this. The Picture below shows you the form in Swedish.

Let me describe each of these if further detail.

Data center
There are several data centers for Dynamics CRM around the World. Two in EMEA, two in North America, and two in South East Asia. If you select a country in EMEA, your organization will be hosted in one of the two data centers in EMEA. Exactly how this allocation is done is for me unclear and I do not think that Microsoft want to reveal this. What I have heard is that there is one data center in on the US east coast and one the the west coast and that there is no easy way to control which of these you will be getting, less than just setting up a couple of different trials until you happen to get one in the datacenter that you would like. I have also heard rumours that there might be some logic in Place that moves orgs from one data center to another to optimize usage. But I have not had any confirmation, denials or comments from Microsoft on this, so I do not think it is true until it is confirmed. I do know that orgs might temporarily be move between the data centers within a region for maintenance reasons or due to fail-overs. Ex. Choosing Swedish will make the org be hosted in EMEA, choosing USA will make the org be hosted in North America.

Language
Which base language will be used, is based on the country selected. For most countries this is simple as there is one dominant main language. If Sweden is chosen, Swedish is the base language. However, there are some other countries where this is a bit more complex, for Switzerland, it will simply be English, and I have not check other countries like Belgium.

Collation/Sort order
Related to the language is also the sort order or in more technical terms, collation. This is important as in many countries with special characters, the sort order is different than in normal English (iso-latin). For instance, in Swedish we have the characters “ÅÄÖ” at the end of the alphabet, these are not just accented A and O but fully qualified characters. The problem is that in the collation iso-latin, these are sorted as A and O (with accents) so a separate collation is used called Finnish-Swedish. There are lots of different collations for many different languages. When choosing the country “Sweden” the collation “Finnish-Swedish AS-CI” is also selected (AS-IS stands for Accent Sensitive, Case Insensitive).

Services
In some countries there are some additional services available to CRM that are not available in other countries. For instance, there are or have been some portal available for CRM Online available in North America that have not been made available in the rest of the World.

Tax and legal
Tax regulations are as many of you know, who have been around, very different between countries. Hence Microsoft need to know how billing is to be handled. There might also be other legal aspects of cloud systems. Some countries might require the cloud system supplier to inform the government of all the customers they have, hence the country selector might be very important from this aspect.

Conclusion
As you can see this one drop down has some quite wide implications. We have to be careful in this case. If a Swedish Company which has US-English as corporate language and hence want this as base language, but all users are based in Sweden and the sort order must be able to handle Swedish names correctly, how is this to be handled? Today, it can’t the solution would probably be to choose the Country “Great Britain”, but that would not give the right collation/sort order still. In that case, only partner hosted on on-premise solutions can currently handle this or this CRM Online organization has to be provisioned manually behind the doors by Microsoft Technicians some how. Let’s hope that Microsoft will soon add a function that will allow for advanced settings for the country selector, allowing for manual selection of each of these five parameters. Until then I hope this posting will guide you a bit and help you make and informed decision on which country to choose. 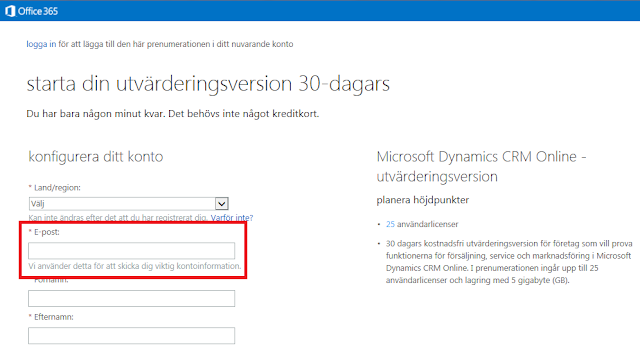 When setting up CRM Online, especially when doing it on an already existing Office 365 Environment, there are some things that you need to know that might not be that evident, so I thought I might elaborate a bit on it.

First of all, the email address that is entered when setting up the Office 365 organization or the Trial organisation for CRM Online is very important as emails regarding the CRM service (and other services provisioned through the Office 365 portal) will be notified via this email address.

So is this a problem? If you are just using CRM Online, and the alternate email address you input is you main work email, no, this is probably not a problem. There are however other scenarios where this might be a problem;
– The Company is using Office 365 as their main work email address and the alternate email addresses are gmail/Yahoo/Hotmail addresses that are seldom checked. For some reason, the CRM service is not payed properly and warnings about the fact that it is to be shut down are sent out to these seldom check email address. Then the CRM system is deactivated for all users and nobody understand why until the users flagged as administrators in O365 (usually very few) finally check their alternate email inboxes and find the warning. Until this is fixed, several Days or weeks may pass with the system down severely damaging user acceptance and profits.
– The original admins setting up the system are no longer with the Company and their alternate email addresses were not directed to “impersonal” email addresses but to their own. When the billing is missed, the effects are similar to the case above.

So, my general recommendations in this case is to make sure that the alternate email addresses used are set with great care and to impersonal email aliases that will remain independent of people leaving the Company. They are to be aliases that are monitored at least once every second day. If using Office 365, the general recommendation is to not use Office 365 email boxes to monitor itself, but perhaps looping it to a Group alias outside which also include addresses within the O365 might be an idea as long as there are people outside the O365 in the alias as well.