A few days ago, I was part of the key note at the Microsoft Partner Day in Sweden. Together with Malin Dandenell at Learning Point, my colleague Rickard Norström and Atefeh Sebdani at Microsoft we demoed a realistic business scenario with all the new great technology (and some more common). The scenario was that I was a salesperson and got the oppotunity to get a business if I managed to get the proposal to the customer within 5 hours. The only problem was that I was out of office my self, only with a tablet, the tech-presale (Rickard) was at the Gran Canaria, without his computer on a vacation and my boss  (Malin) was home taking care of sick children.

We showed that this was totally doable with the use of modern tablets that are more than just large Angry-Birds-play-machines, but actually very slim and fully fletched windows computers than with the use of a blue-tooth keyboad and mouse are turned into a normal computer. I used a Samsung Windows 8 Pro and the only thing holding me back is that I really would want a Surface Pro but the release plan for that in Sweden has not been set yet (it can be ordered from France or the UK though).

Rickard used a Win2Go and and old Vista computer to quickl get his Windows 8 machine with built in Direct Access and all the modern applicatons he needed to quickly get up and running to be able to help me with the quote. The amazing thing was that the Win2Go actually booted quicker than Vista was to shut down.

We also used Lync for Video conferencing, word co-authoring and the Lync feature of letting someone control a program in your computer. Finally I presented the quote to the customer using Word Present Online.

We actually did use CRM aswell :), I started off with doing the meeting in tablet mode using the great Resco Mobile CRM client. I got a lot of great feedback from that, seems that many people don’t know about it. I had originally planned to use Dynamics CRM a bit more than that but the demo was really tight at <20 big="big" darlings="darlings" favor="favor" for="for" have="have" in="in" kill="kill" minutes="minutes" nbsp="nbsp" p="p" picture.="picture." so="so" the="the" to="to" you="you" your="your">
My overall impression is that the new stack of products from Microsoft are not only cool but can give you a real edge on the competition by shortingen the OODA-loop. So try not to be left behind! 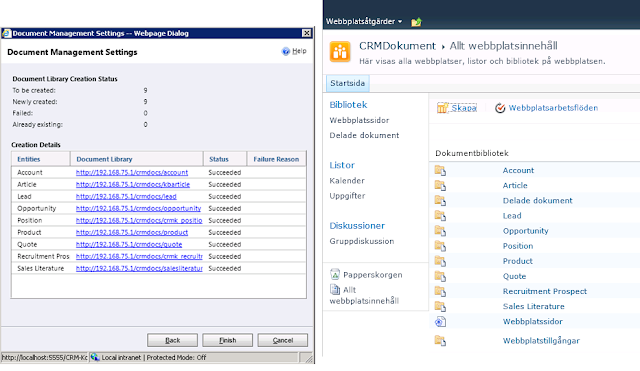 As many of you know Microsoft Dynamics CRM 2011 has a built in integration with SharePoint. As a former SharePoint consultant I have reviewed it to see how it looks, not only from a CRM perspective but also from a SharePoint perspective and there are some major issues from this perspective that one needs to take into consideration. For those of you who attended my presentaton at SharePoint Exchange Forum 2012 22-23 of october this year this is more or less what I presented.

First of all, to make it work properly, you are recommended to install a special addon to SharePoint called the CRM List Webpart. This makes the document lists in SharePoint get a more CRM-y look. I found a very good blog with detailed instructions on how to install it which, at least for me, worked perfectly; http://mossdevsharepoint.blogspot.se/2011/07/integrating-crm-2011-with-sharepoint.html

It will default which entities are to be used for the integration and you are also asked for the base site URL. This site will contain all CRM documents unless you do some manual configuring (as described below) so I generally recommend that you create an empty site. It will also create one document library per entity that you have selected in this site.

For now, let’s refrain from the ranting and just note that this is how it will look.

If further entities requrie document management, these can be added later by re-running the wizard.

After you have selected which entities you would like to use document management for, the wizad will show you the following query:

This query is very important to the structure of documents in SharePoint. If you chose to use a folder structure based on an account or contact (my recommendation is generally to use Account here if this is your primary customer entity and only use contact for strict B2C).

If you choose the structure based on account, a folder structure will be created in the SharePoint Document Library as follows:
﻿﻿﻿﻿

Do note the folders called Opportunity and Quote that have been created. Rant below.﻿

If, instead the structure is selected that is not based on an entity, a flatter structure will be created.
﻿﻿﻿

The folder structure is a lot flatter, but note the difficulty of trying to identify the quote folders for the opportunity “CRM Online for A Store”. As no hierarchy is used, the only way of distinguisishing sub-objects is to use descriptive names as I have done with the opportunities in this case to indicated that all your bases are belong to us.

To be total just, no object specific document folders are actually created in this step. This is something that is done the first time you open the documents tab for the object (ex. the account “A Store”).

So to give a quick review, the following can be concluded:
– Hierarchical structure is to be selected if documents are to be navigated to with SharePoint as the flat structure makes it very hard to understand which folder belongs to which place.
– When you reparent something in CRM, for instance if the opportunity was created towards the wrong company in a corporate hierachy and you reparent the opportunity. This will not trigger any changes in SharePoint which is ok if the flat structure is used but not so good if the hierarchical structure is used as the opportunity documents will be stored under the wrong account.
– The flat structure gives a clearer division of document types. For instance all Quote documents will be stored in a separate document library and all documents related directly to accounts in another.
– With the hierarchical structure, most documents will be stored in the account document library which for larger installations would incurr large amounts of documents. This will make it more diffucult to use.

You can also connect your CRM objects manually to a specific folder/document library, this enables you to create a more logical structure in SharePoin, like one site per customer, and then manually connect each of these site’s document libraries to the corresponding account in CRM. The problem with this is that you have to follow the following steps to do it (example for a customer setup)

This will not work in normal CRM implementations as the tasks are too complicated for normal users, and especially salespeople to do.

Another perspective that is important to remember that the security (privilages) for the document libraries are not replicated from CRM to SharePoint. SharePoint has a more traditional top-to-bottom security architecture and the security architecture of CRM is a lot more complicated and it is very complicated to try to replicate the privilages for a specific object in CRM to the corresponding folder in SharePoint. This is due to the fact that the CRM security architeture is dependent on both owner (user or team) and sharing that have been made. For instance adding or removing a person from a team would requrie you to check all ownerships and sharings for that team in order to mimic the security settings. The recommended way of handling this is to allow all people in a group to have access to all documents in SharePoint and then remove access (inheritance) for the folders that require special permissions. It requires special handling and would be very cumbersome for large organizations.

My final conclusions are hence that the use of SharePoint as a document storage tool for CRM greatly enhances the document management funtionality of Dynamics CRM but it has not been designed to enable logical use of the documents from a SharePoint perspective. The security aspect is also somethnig that will reduce the way it can be used. I would also recommend that the documents are to be accessed mainly from CRM and only in very special cases from SharePoint.

I am not aware of any third party addon that increases this functionality, if you do, please leave a comment!

Getting users, especially salespeople, to really use the CRM system is one of the most important parts of implementing a CRM system for an organization. There are numerous examples of CRM systems with lots of great features that just have not been used by sales people which causes the data in the CRM system to be incomplete and hence not very usable.

I am a big fan of computer games, currently Battlefield 3, and one thing many computer games excel in are that they are really good at user adoption, it is really the basis of it all. Without it, they just wouldn’t sell. There are ongoing trends in the business to “gameify” business applications to make them more fun to use and hence makes user adoption a lot better since you are makeing users really want to use the CRM-system.

One of my fellow MVP:s, Pablo Peralta, has been part of bringing forth a great new product, called CRM Gamified which brings some of the principles used in computer gaming to Microsoft Dynamics CRM. Let your sales people compete in getting point for different task in the CRM system and have dashboards showing the leaderboard. So, do have a long a deep look at this addon. It could litteraly change the way you do CRM.